This is the text from my 2019 Easter Sermon. You can listen to it by going here. 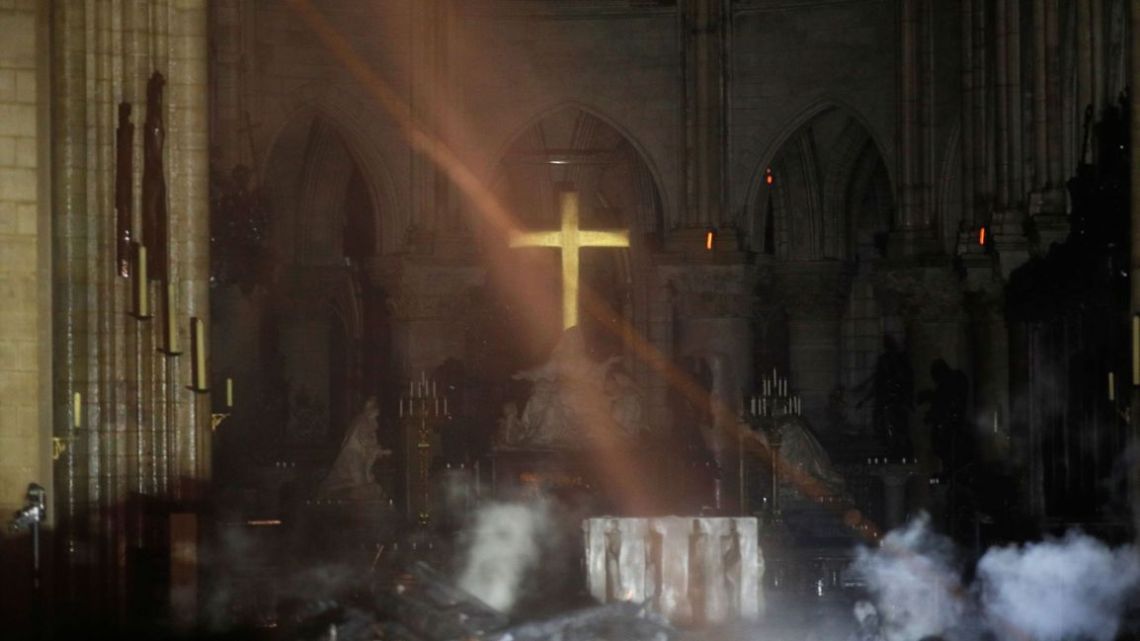 I’ve been blessed to have been inside Notre Dame twice. The first time was in 1998, my first time in Europe. The second time was ten years later in 2008 when I was on honeymoon with my husband. We had a hotel near Notre Dame, and we checked in and dropped off our suitcases and went to Notre Dame. The inside is glorious. I’ve always been amazed that this building was built nearly 9 centuries ago. The people who built this cathedral were building something they would never see completed.

So I was shocked and surprised when I heard that Notre Dame was on fire. Seeing the pictures was horrible. Many of us were wondering if Notre Dame would survive. Would it be reduced to rubble. Thankfully, after a few hours the firefighters were able to extinguish the fire after a few hours. The inside the was a disaster, the spire had collapsed, the wooden roof was gone. But the structure was still there and it could be restored. Maybe you saw the images from the inside. The inside is a mess. There is debris everywhere. It will take a while to restore the sanctuary. There is one picture that I think captured the whole story. It shows a picture of the altar and all around it is debris. Sitting on top of the altar is a cross. It looked like it had not been disturbed in the slightest. Out of nowhere it seems, is a shaft of light that shines down on the cross. In the midst of all this devastation and sadness, in the midst of seeing the horror of this grade edifice being damaged, was this symbol of hope. The message conveyed was that in the midst of pain and grief and sorrow, there is also hope and joy. The cross, a method of execution that the Roman empire used to kill those they deemed the worst of the worst, the instrument that brought suffering and death to Jesus, is also what gives us life and hope.

Today’s text in Matthew shows the women who followed Jesus heading towards the tomb. In the other gospels, the women head to the tomb in order to prepare the body. Here, there is no talk of preparing his body, they are just going to the tomb. They are not expecting that anything could change. Why would it? Jesus was dead. There was a stone in front of his tomb with Roman soldiers guarding the tomb. There was no hope. But then the earth shakes, just as it had a few days before when Jesus died. The stone is rolled away and an angel appears. The guards are so scared they faint. The angel tells them that Jesus the one that was crucified is no longer at the tomb and now has been raised from the dead. The women make their way to tell the disciples and it is there that they meet Jesus. They can’t help but touch him, because it seemed so unbelievable. Jesus tells them to go and tell the disciples to meet him in Galilee.

There are a few things about this story. When the angel says that Jesus was crucified, in Greek it’s in the perfect present tense which means that Jesus wasn’t crucified in the past, but it is current. Jesus was still dealing with the crucifixion. It is not something that Jesus got over, it is still present with Jesus even though Jesus conquered sin and death. Easter is not simply about the joy of the resurrection, but it is also a reminder that God in Jesus is familiar with grief. Jesus is familiar with pain. Easter tells us that sin and death don’t have the last word, but on this side of heaven, there is still pain. The difference is that God is with us in grief and pain.

The movie Amistad is the telling of a slave revolt on a ship bound to America. The slaves were put on trial and as they were awaiting their day in court, one of the men was given an illustrated Bible. He shares with another person the account of the crucifixion and he immediately saw that this God chose to die. He understood that God knew of suffering and grief. It gave him a sense of comfort to know that this God was with him in an uncertain time because God suffered like he did.

The second thing is use of the word phobu, where we get the English word, fear. The angel tells the women to not fear. The tense suggests that fear is used to say stop being afraid and keep being not afraid. The guards were filled with fear and fell down like dead men. But the angel is saying that the resurrection is nothing to be afraid of. Instead, this is an event of joy.

We live in an age where fear is very strong. I’m not talking about the feeling you get when you ride a rollercoaster, but that feeling you get when you get that phone call at 3 am in the morning knowing that something has gone wrong. People are fearful of the other, people of fearful of the economy, people are fearful just plain fearful. Where there is fear, there is very little love or joy. The angel tells the women to trust that Jesus is not at the tomb, Jesus is alive just as he promised. The cross is many things but the one thing it is not is an instrument of fear. The Romans intended it to be an instrument of fear, but God in Jesus took the fear away. The cross reminds us we will face suffering, yes, but we don’t fear the suffering because God is with us and death never, ever has the last word.

When I was in seminary, I started to learn a bunch of new hymns. They were necessarily written recently, some were written centuries before. One such hymn I learned was “Lift High the Cross.” The song is a reminder that the tool of death, the tool of the world is has been transformed to something shows the victory over sin and death, even though we face the sin and death, they will never, ever have victory over us and most importantly over God.

Lift high the cross, the love of Christ proclaim
till all the world adore his sacred name.
Come, Christians, follow this triumphant sign.
The hosts of God in unity combine.*

The symbol the cross on the altar of Notre Dame tells us that the cross is lifted up amidst the chaos of the world. Jesus is victorious. Even when we face tragedy, when we face the grave, the cross still stands to share God’s love.

Easter is a day of joy, not simply happiness, but a sense of joy even when life is strewn with debris. We are joyful because the one that is crucified is no longer in the grave. So let us lift high the cross, telling all we meet that Jesus is alive and hope is here. Christ is Risen! Christ is Risen, indeed. Amen.