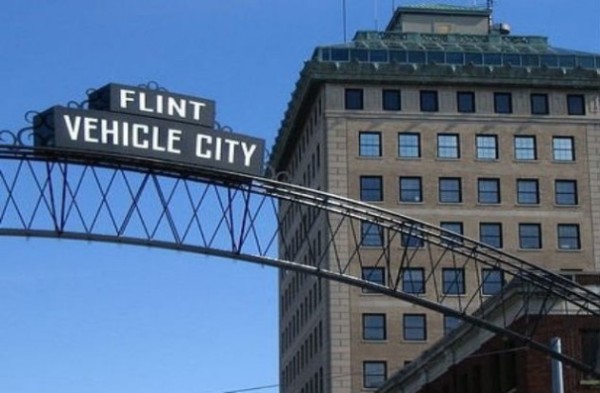 As many of you know, my hometown is Flint, Michigan which has been in the news lately because of lead contamination of the water supply.  I’ve been busy helping  my congregation here in Minnesota collect water filters to send to Flint and I’ve written some articles on other blogs about the crisis.

But I wanted to take a moment to talk about the city itself, how people view it and why it needs the church’s attention and help long after the TV trucks and celebrities leave.

Flint is a city that has been on the ropes for a while now, since General Motors contacted its local workforce.  But even though Flint has seen better times, there are signs of hope that want to remind people of. Two years ago, I reflected on what was happening in downtown Flint after years of dormancy:

Flint is the kind of city that can break your heart.

Despite all the sadness, something is happening in my hometown, something wonderful.

I’m currently in town visiting my parents.  My husband Daniel and I walked through downtown and saw a vibrant area.  New restaurants with patios dotted Saginaw Street, the main drag.  A busker played music at the edge of the University of Michigan Flint campus.  Several buildings were are being remodeled for new uses.  The Durant Hotel, that’s sat vacant for nearly 40 years has become apartments.  Lofts are showing up in various buildings downtown.  The Flint Farmer’s Market moved to downtown from a nearby location and a local business person says restaurants are seeing increases in traffic after it’s grand opening.

Something is happening in Flint’s downtown after a decades of nothing happening.  What’s interesting here is that this wasn’t some master plan. It seems to be happening in a piecemeal fashion, a project like the Farmer’s Market here, and art gallery there.  Downtown Flint is becoming a place where people gather and live- and it may hold the key to helping Flint transform from an industrial town to….well, I don’t know what.

I added that Flint still has challenges, but there was some hope:

None of this means everything is fine in Flint.  There are still neighborhoods of blight, African Americans who make up the majority of the population don’t have access to a good  education let alone jobs.  The city is still losing population.

But the seeds of Flint’s revival are taking root.   As I walked through the Farmer’s Market, I encountered a meeting of young people interested in investing in Flint and Genesee County.  Seeing that gave me hope that my hometown will make it.  It won’t be saved by a big employer like GM or by  blingy projects, but it will happen organically with people who live here stepping up and making a difference one by one.

Flint is a city that can break your heart at times.  But this trip reminded me it can also uplift your heart as well.

A commenter left a note on the blog of the former mayor of Saginaw, Michigan that describes the good things happening in the Vehicle City:

How about some good news for Flint? Like: have you been downtown recently? The new lofts, the new businesses, the new restaurants. Back to Bricks that draws about 1/2 million people! U of M ( University of Michigan-Flint) going gangbusters and expanding each year. Look at Kettering University, another school going gangbusters. Look at the School of the Deaf and it’s new campus, look at Powers High School’s new campus. All big and long term investments to the City. Look atDiplomat Pharmacy’s new HQ. Look at the CEO of Diplomat last year donated a couple million $ to U of M Flint. Landaal Packaging, they opened up a tech office downtown. The list goes on. Did you know, if you add up all the college students enrolled in Flint.. (U of M, Kettering, Baker, Mott and others) Flint is a college town. Flint has more colleges students enrolled over all than EMU! Look at the re investment of General Motors. Look at the Mott Foundation that has never left Flint.

Finally, I wrote in late January that the nation should do more than just send water:

While I am thankful to see celebrities like Jimmy Fallon, Mark Whalberg and Diddy donate water bottles to help citizens, Flint needs more than just a bottle of water. The reasons Flint is in this mess is because of loss of tax revenue or loss of jobs.  What we need more than water is investment.  What Flint needs are people like Craigslist founder Craig Newmark to do more than give money for water but find ways to create new startups or support ongoing incubators like Co+Work. We need young people who want to come and live (the housing is cheap!) and start new businesses like the two the cobblers who started Sutorial Boots and Shoes. We need other kinds of manufacturing to help employ the vast unemployed in Flint.

Flint was a great city and it isn’t as much now.  But it does not have to live in its past if people are willing to invest in its future.

So I ask what I’ve asked before: don’t forget Flint.

Flint is in the mess it is in partially because of changes to the economy. For city government to function it needs a growing, not declining tax base. What Flint needs is people from around the country that are willing to lend a hand and help the city be more than the failed city that we see in the media. There are a lot of good things happening, but they need help if they are to take root.

I especially say this to progressive/mainline Christians: help Flint. It is more than a tool against conservative ideology; it is a people that need the nation’s help, not only to get water, but to grow. Mainline churches tended to abandon Flint as people left the city in the 80s and 90s, it’s time for them to come back to the city planting new churches and also push for a better and safer Flint.