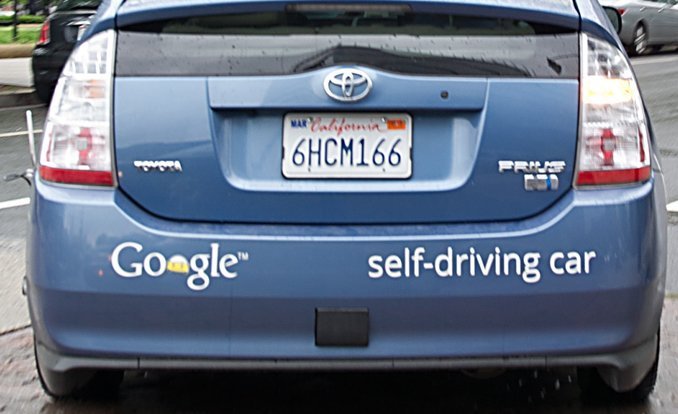 Being from Michigan, I am a car nut.  I kind of miss not being in Detroit today because it’s time for the annual Detroit Auto Show which because it’s in the Motor City, it is the car show.  Daniel and I have gone for several years in a row, but won’t be attending this year.  Hopefully we will get back there next year.

Like I said, I like cars.  I like to drive cars.  If I could have been an auto journalist I would have.  But I would have to learn to drive a manual if I wanted to do that.  Someday I will tell you the story of my one and only attempt to drive stick.  It involved a Ford Taurus SHO and burning rubber in a Missouri Arby’s parking lot, but that will have to wait for another time.

One of the biggest developments at Detroit and in the automotive industry in general is the rise of automated or self-driving cars.  These cars are only in the testing stage at this point, but they are more a reality than they were say five years ago.  At this point, more and more cars have some sort of assitive technology that gives the car more control.  We have cars that can sense when you might be drifting into another lane, and cars that can brake themselves if it senses a collision.

While I think some of the assistive tech is a good idea, there’s a part of me that is not crazy about autonmous cars or what others think about these cars.  A number of writers have opined that the most dangerous part of the car is the driver.  They celebrate that fallible humans are written out of the process to ensure a more safe drive.

Maybe I’ve read one too many scifi novels about robots becoming our overlords, but it does seem we are giving power over to a machine, all because we are fallible.

I like to be able to drive. I like the sound my car makes when it’s shifting gears.  I love the car’s get up and go and I love how that feels.  An automated car means I don’t drive, I don’t get to derive pleasure from the vehicle, I become passive, letting the car do all the work.  But, the self-driving car seems to be on its way to being a reality, so I guess I have to learn to love my robot overlords.

The root of the problem here is that a self driving car means giving up control.  I have to rely on microchips and motherboards to make sure I get from point A to point B.

What this has in common with our text today is that in our Christian walk, we are called to allow God to work in the world and trust that God is working things for the better. We have learn that faith is not all about us.

in chapter 4 of Mark, Jesus shares several examples of parable that focus around farming such as it was in first century Palestine.  The first story is the most well known: the parable of the sower.  It involves a farmer that scatters seeds hither and yon.  The seeds fall in different types of soils, rocky soil, among the weeds, on a path and finally in good soil.

I’ve said this before, but I need to say it again: I used to hate this parable.  The reason I hated it is because in the churches of my youth, everyone was focused on the second part of the parable, the part where Jesus explains the story to his disciples.  People have taken these verses as proof of what this story was all about.  But the thing with Jesus’ parables is that they were told straight, but told as Emily Dickenson said slant.  Jesus did explain the parable somewhat, but it almost seemed too easy.  Was Jesus trying to say something else?  Was he only sharing part of the meaning?  Look back at the parable.  What do you notice?  If you know anything about farming or even just gardening, you should pay attention to what the farmer is doing.  For the farmer, sowing seed means throwing it anywhere.  I don’t think that’s what a farmer usually does with seed, unless one is really lazy.  I remember one time just throwing grass seed around on bald spot of lawn a few years back.  The results were less than optimal.

Why would a farmer throw see around like that?  What was the meaning here?

Let’s set that aside for a moment and look at the second farming parable, the Growing Seed.  If the farmer in the first tale is wasteful, this one is just plain dumb.  It seems that the seeds were just planted automatically and the farmer is at a loss to understand how it was planted and how it is growing.  You would think the farmer might want to water the plant, but he just sits aghast at this plant growing.  How in the world did this guy become a farmer?  He ends up harvesting the grain when its ready. At least he knew that.

The final tale is about the mustard seed.  Jesus says its a small seed, and indeed, it is.  But once it is planted it becomes a big plant.  What you need to know is that the mustard plant is sort of invasive, it takes over an area, much like kudzu does in the American South.  So God’s kingdom is like kudzu.

What do all three stories have in common besides having dumb farmers?  They are all about the kingdom of God and what is common in all three stories is that things happen in spite of human interaction.  The sower isn’t careful where the seed is planted; it is just planted anywhere and everywhere.  The second farmer doesn’t even plant the seed, but it still grows and produces a harvest.  The third tale doesn’t even have people in it- it’s just about this small seed and how it grows everywhere.

That thought is both humbling and freeing.  It’s humbling because it means that all of our hard work for God doesn’t get us a gold star.  It means that God loves us for us, not because we do things that please God.

The freeing part is that we don’t have perform.  We don’t have to feel that we have to do God’s work or nothing will happen.  God’s work happens; we can choose to join it or not, but it will happen and it won’t be stopped.

This can be humbling for pastors.  We like to think everything is on us, but in reality it isn’t.  It means that churches are places where we are looking for where God is active and joining in.  It means that we tell people where we see God active and point to God.  It makes faith more of an adventure than a chore.

As much as I am wary of automated cars, there is a mode of transportation that I use that I am not in control of.  Everytime I board a modern airplane, I am entrusting my safety to the pilots in the cockpit.  As I like to imagine me telling the pilot, their job is to make sure I don’t die.

The fact is, I’m actually putting more faith in the airplane’s navigation systems more than I do the pilot.  Most of our modern airlines use autopilot to get from point A to point B with the pilots there to help with the flying and to step in when the autopilot might not work.

If I can trust God and look for where God is active in our world, maybe I can accept a self-driving car, provided it doesn’t drive me off a cliff.

Thanks be to God. Amen.

Listen to the Sermon