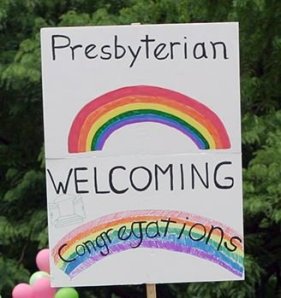 This past week, the Presbyterian Church (USA) meeting in Detroit, approved pastors being able to marry same sex partners in states where same sex marriage is legal.  According to Presbyterian polity, it still has to get the approval of the majority of presbyteries (there are 172) before it becomes the law.

Judging Facebook and Twitter there were a lot of comments about how good this is and I agree with them.  But will this action, coupled with the approval of non celibate gays to become ordained a few years ago save the Presbyterian Church?  Will it save any church?

I ask that question, because I read an article by Carol Howard Merritt about how these actions might turn around the PC(USA)’s decline.

After serving growing churches, I know that people have been attracted to our church because we upheld LGBTQ rights. This is why we can grow, because of this decision:

Young adults overwhelmingly support LGBTQ rights. According to Pew Research, about 70% of Millennials support marriage equality. Guess what? The 30% is probably already going to another church. So, it’s a good plan to focus on the 70%.

The old-school evangelical church is declining because of their attitudes towards LGBTQs. For many years, people have told us evangelical churches were growing because of their doctrinal purity. But, as a refugee from the conservative Southern Baptist Church, I can tell you, homophobia combined with asking women to “graciously submit” and not use birth control pills, is not a strategy that will hold up with… almost anyone.

We’ve watched the exodus of younger generations. We’ve seen emerging churches mature. We’ve witnessed a movement of evangelicals embrace a more compassionate faith. Now the Southern Baptists are grieving losses as well. I don’t want to sound smug about this. Leaving my Baptist roots was the most painful thing I’ve ever done and I’m distressed when someone leaves church. I’m just saying that so-called doctrinal purity is causing decline in many cases, not stemming it.

I would like to believe this, but my own experience tells me that this reasoning is too good to be true for a few reasons.  First, I think everyone wants to pin the blame on something they don’t like as the reason for church decline.  If you’re a conservative, you will blame those loose liberal values.  If you’re a liberal then you think it’s because of the strict morality preached from conservative pulpits.  Either way, it’s the other side that is causing the ruin of mainline churches.

I don’t think that the reason mainline churches are losing members rests soley on embracing liberal theology and practice. Yes some folk do leave for doctrinal or theological issues, but I don’t think that captures all of the problem.  Some of the “fault” lies in a changing culture that is far more secular than the 1950s Mainline Protestant dominance.  Loses within the Southern Baptist Convention could stem from the fact that many Millenials don’t have a presence for any religion.    Are Millenials leaving the SBC because of the gay issue?  Probably.   But it also could be that the youth have lost interest in the adult world.  It could be having to work to pay off student loans which takes time.  We don’t know all of the why it’s happening; we only know that it is happening.

Also, if the gay issue is the thing causing people to either leave or join the PC(USA), you would expect massive shifts from more conservative denominations to liberal ones.  That’s not happening.  The splinter groups that became denominations never get a huge chunk of followers.  The same goes with the reverse: if people are upset at the SBC, you would think there would be a massive uptick in the mainline denominations.  In both cases, what probably happens when young people stop coming is that they stop coming to church,  period.

The thing is, while votes to change policy are very good and necessary; there is something about this belief that mainline churches will now grow that seems half-baked.  Progressive Christians believe that if they take some official position on gays or women or the economy that will cause people to consider their churches over evangelical ones.  Yes, it’s good that churches are becoming more open to LGBT folk.  But the thing is, the job is only half done.  Maybe some people will darken the door of a church because of a positive vote, but not everyone.  What will bring people is when members of LGBT-friendly churches do some old-fashioned evangelism.  They need to go to a LGBT friend and tell them about their church and how welcoming it is to them.  They need to tell LGBT people of how God loves them.  When that happens, then maybe, just maybe the numbers in mainline churches will grow.

Methodist blogger Sky McCraken wrote two years ago, that the reason for decline in denominations has little to do with it’s stance on homosexuality and more on making – or failing to make- disciples:

Changing the stance on homosexuality in the United Methodist Church will not stop the loss of membership in the denomination. It’s at best a red herring and at worst a lie to espouse otherwise. The Southern Baptist Church continues to lose membership; they are in their fifth year of decline, and they have a very decisive, very clear statement on their opposition to homosexuality. On the other side of the issue, the Episcopal Church also has a very decisive and clear statement on homosexuality, where they bless and celebrate same-sex unions as they do male-female marriages, even though doing so separated them from the Anglican Communion. Did it help them gain members? Their membership is now lower than it was in 1939.

The loss of membership in both denominations, as well as in the UMC, can reasonably point to one reason: failure to make disciples. We can blame society, we can blame the president and Congress, we can even blame MTV. But we can’t blame our stances on homosexuality. The fact that I hold an orthodox view on this issue and agree with my denomination’s stance doesn’t let me off the hook for anything – that has nothing to do with a failure to make disciples in the name of Jesus Christ. And yes… that is what it says in Greek: μαθητεύω – to make a disciple  – it’s a verb, aorist tense, imperative, plural, second person. And as Dallas Willard reminds us, we are more often guilty of the Great Omission: once we baptize folks, and/or they have been converted to follow Christ, we seem to forget the rest: “teaching them to do everything that [Jesus] commanded you.” That’s discipleship. We have failed at discipleship – we suck at it! –  and have for several generations.

If gay people show up at a local Presbyterian church and ask to be married, that’s a great thing.  If they end up attending, that’s even better.  But what do we do once they are there?  Is our job over, and we can now relax?  How are we helping them become better followers of Jesus.  As McCraken notes, Americans Christians have done a poor job of making disciples; people who want to follow Jesus.

I am glad that this vote passed.  What I hope is that those Presbyterians in churches near and far not only welcome LGBT and Allied people into the church, but then help them become disciples of Jesus as well.

*I wanted to add that not being nice to gays won’t save your church either, but that would have been a crazy long title.