“When You Do This, Remember Me”
John 11:34-42 and Revelation 21:1-6
All Saints Sunday
First Christian Church
Minneapolis, MN 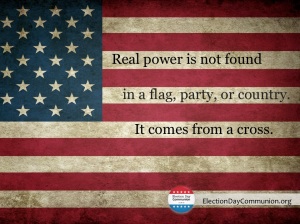 I can remember like it was yesterday.  It was November of 1976 and the election season was winding down.  As the grown ups were getting ready to vote between then Governor Jimmy Carter and President Gerald Ford, my second grade class was also voting.  We wrote our choices on a slip of paper and handed it in to the teacher.  Being seven years old, most of us voted the way our parents did and I was no exception.  I voted for Governor Carter, if you’re interested.

Being that this is an election year, you’d think that I’d be excited, but this time around, not so much.  Yes there is a lot to think about this year, but for some reason, I’ve grown a bit distant when it comes to politics.  The reason for this is the tone of the various campaigns.  Maybe this has always been the case, but for some reason it seems that people have grown more nasty towards each other.  I’m not talking about the campaigns as much as I am talking about the people themselves.  I’ve been on Facebook enough to see that the tone of the race has grown more heated and less understand of each other.  One Facebook post said something to the effect that if one of his friends was voting for one of the major party candidates, they were no longer friends.  People hurl accusations that this candidate or that candidate is going to bring untold evil upon the earth.  The sad thing is some of this is coming from Christians.  Republican and Democratic followers of Christ hurl insults at the other party, seeing them as the living embodiment of evil.  Hearing all of the invective thrown around has made me feel a little less interested in politics.

Today is All Saints Sunday.  All Saints Day occurs on November 1 and many churches commemorate it on the closest Sunday.  As it does every four years, All Saints Sunday intersects with Election Day.  It reminds us of the double nature we exhibit in our lives, that of being a citizen of a particular country and also being a saint of the Christ’s church.

On All Saints Day we usually remember those who have died in the past year.  While that is very important, that’s not all that this day is about.  You see, the saints are not just those who have died, but it is also all of you.  We are the living saints, a living example of the kingdom of God that is to come.  We are saints not just on Sunday, but we are saints in all of our lives; in our work, in our play and in our politics.

Revelation 21 talks about a future hope, a time when the old heaven and earth are made anew again, when God can fully claim his people free of all the things that have tempted the people of God. Bitterness and division are no more.  God’s people are forgiven and renewed, made new.

This is the world we live in.  We live in a world where there is division and death.  But we also live in a world with a Savior.  Jesus is able to raise Lazurus from the dead, astounding the people and bringing restoration to Mary and Martha. 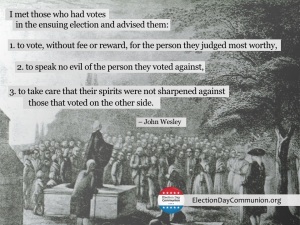 The raising of Lazurus is a foretaste of Jesus own resurrection and the resurecction of the whole of creation at the end of time.

John 11 and Revelation 21 are held in tension; a case of the now and the not yet.  Revelation tells us what the endpoint is, John 11 talks about now, the brokeness and the tears, but also the hope that points to that future.

In John 11 what see Jesus doing, pointing towards the future, is what the church, this church, is called to be.  Only God can bring about the joyous ending of Revelation, but we can show all of creation a foretaste of the future by living as if the future were already here.

So what does this all have to do with Election Day?  A lot.  If we are saints of the church, harbingers of the future, then we are called to be a bit different than the world around us.  The problem at times, is that we are tempted by the world.  The church has a long history of substituting the political agenda of the society around them for the agenda God has given us, one of healing and reconcilation.

As citizens of the United States, we have a duty to be involved in the managing of the affairs of the nation.  As a nation, we have differing views on how to best govern the nation.  Some might want more government intervension and others might want less. Some believe that we need to more taxes for revenue and to pay for social programs, while some believe taxes should be lowered to spur the economy.  I’m not here to say which one is better.  I’m also not here to say we should not have these various views.  But as saints of God we need to careful to not confuse church and state.  Too often we adopt the ideologies of the wider culture.  The partisan bickering that has become a staple in our society then become mirrored in the life of the church.

But the church is called to be more than just a religious version of the Republican and Democratic parties.  We are called to be a foretaste of the restoration that is to come.  We claim Jesus as our Lord, our Savior, not Mitt Romney or Barack Obama.

Earlier this year, Sharon Watkins, the General Minister and President of the Christian Church (Disciples of Christ) wrote a letter to the church regarding the differences belief on the issue of homosexuality.  While I’m pretty sure she had an opinion on the issue, she was focused on what unifies us.  She focused on what we Disciples focus on every Sunday- the communion table.  It was a place where people of differing views could come together as one, as children of God.

Some have criticized Watkins for not taking a firmer stand on LGBT rights, to call a spade a spade and push for full justice and inclusion of LGBT persons in the life of the church.  I can understand that, but I believe she was calling us to be the church even as we struggle with this issue.

On election day, by all means go and vote.  That’s important.  But remember saints that our hope is not in a president or a political party, but in Jesus.  Remember that you are the church.  Remember to be the church so the world can see the future hope that lies ahead of us.  Thanks be to God. Amen.

One thought on “Sunday Sermon: “When You Do This, Remember Me””