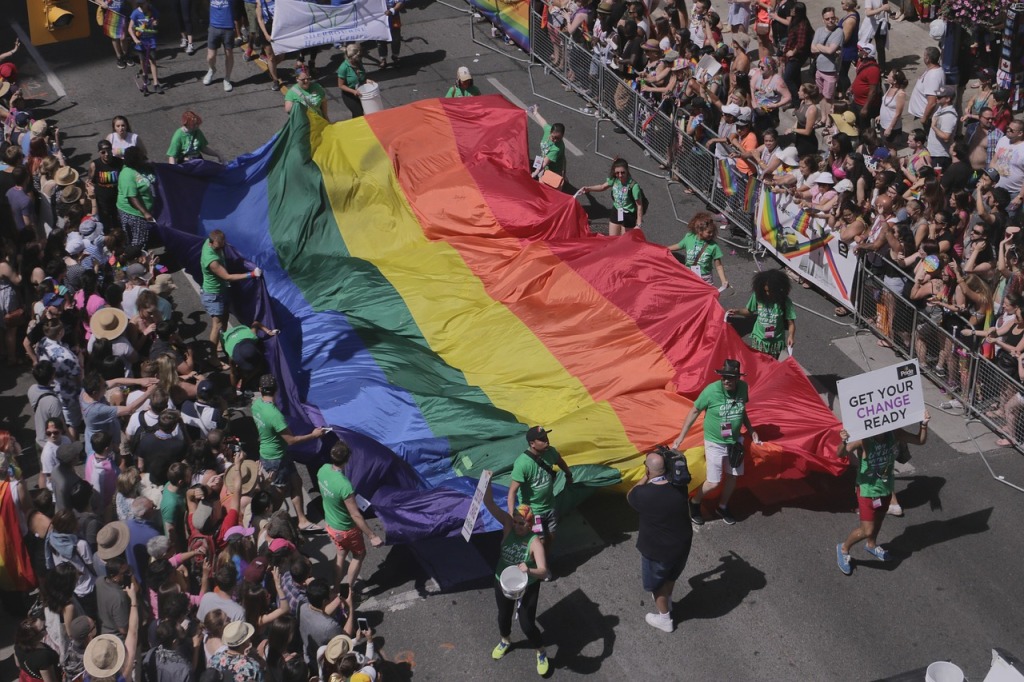 It’s been about two years since our congregation voted to become an Open and Affirming congregation, meaning that we openly welcome Lesbian, Gay, Bisexual and Transgendered persons into the life of our church.  I think that’s a good thing, but over the years even long before our vote, I’ve been wondering about the quality of the pro-inclusion argument.  Whenever I’ve seen people argue in favor of LGBT inclusion, the main thrust goes like this: Jesus hung around undesirable and marginalized people and so should we.

I get what this message is trying to say, but it feels sort of a flippant answer and not really delving into the question.  Too often, people cherry pick Scripture to find some verse on inclusion and maybe throw in that the rest of society is more accepting of gays and so should we.  But the thing is, it really doesn’t answer the deep questions that issues like this bring up.  Who belongs to God?  And why?  How are we accepted by God?

In today’s text, Paul is teed off.  Something is taking place that has hurt the Gentiles who came into the faith.  A leading founder of the church was exhibiting a two-faced behavior.  A delegation from Jerusalem is stirring up dissention.  Paul has to say something to put things right.

The problem here is similar to what we talked about last week.  A group of Jewish Christians have come to Antioch to persist that any Gentile Christian must be circumcised to be part of the faith. In some way they are being pushed by events in Jerusalem.  A nationalist movement is coming to fore in Jerusalem and demanding people follow a strict interpretation of the law.  This group is causing trouble especially with the church which had started welcoming Gentiles.  Peter who was in Antioch, knew what was going on back home. He had made it a habit to eat meals with the Gentile Christians.  Eating a meal with someone is a sign of a close relationship.  When, Peter sees these Jews from Jerusalem urging for purity, Peter decides to stop eating with the Gentiles.  Peter probably believed he was doing this to keep the Jewish Christians back home safe from persecution.  But he did it at the expense of the Gentiles who now made to feel like second-class Christians.

Paul is seeing all of this and he is mad and calls Peter out.  He rails against what Peter has done and how it led to other Jews to engage in the same hypocrisy.  This is when Paul goes into sharing what really matters in the faith.

Now in the past, this passage has been seen in a very simplistic terms.  Pastors tend to see this as Paul repudiating the Torah and saying that all we need is to just believe in Jesus.  In this view, it sets up Judiaism is the wrong faith and that Christianity is the good faith.  But at this point, the church was still a sect within Judaism. Paul and Peter and others didn’t see themselves as starting a new church, but probably more as reforming Judaism.  Paul’s words in chapter one shows he was a faithful Jew and didn’t see himself as leaving the faith.

So Paul isn’t arguing for a new faith, but and expansion of the old faith.  Paul is talking about covenant.  If you can remember way, way back to last September, God establishe a covenant with Abraham and the whole Jewish people.  God and Israel would be in a covenant relationship.  So in this way, the covenant was focused on one specific people, the Jews and these Jews would perform works like circumcision. These works were not done to please God, but were a sign to show that they belong to God.  So when Paul says in chapter 2, verse 16 that righteousness doesn’t come by following the law, but faith in Christ, he is not saying what you think he is saying.  The law was a way to mark you as a Jew.  But Christ’s death on cross means that this mark is no longer needed.  Righteousness was no longer limited to nationality, but was for everyone.

When Paul talks about faith, it is again tempting to believe this is about mental assent.  If you really believe in Jesus, then you’re in.  Believing in Jesus matters, but the real nugget is what Jesus has done, not what we have done.  Yes, we should believe, but it is not about beliving in Jesus as much as it is to realize that God in Christ has already done the work.

This is why Galatians is called a book about freedom.  We are freed from the different barriers to be able to live as community who realizes it is free in Christ.

So, if I was going to talk about LGBT inclusion today, I would say something like this:  they don’t have to give up their sexuality in order to show they belong to God.  Instead, they are free by faith, not mental assent, but realizing that God has already done the work to make them, to make me belong because of what was done on a cross on a hill a long time ago.  Inclusion in Christian terms is not about trying to be hip or trendy or being on the right side of history.  It is about knowing that we, all of us are free. It is knowing and trusting that God has done the work of inclusion because of the work done on the cross.  This is why we are Open and Affirming.

Our second text from Luke, is the parable of the Pharisee and the Tax Collector.  You see how the Pharisee comes before God.  He stresses he has done all the things that show that he was a faithful Jew.  Then we see of the Publican or the Tax Collector.  He doesn’t really want to be there.  He doesn’t even look up to heaven and pleads for mercy.  If you remember, tax collectors were not seen as upstanding people because of their work with the Romans and because they could rip people off.  The publican can only rely on the grace of God.  Unlike the Pharisee, he couldn’t talk about all that he had done.  He knew he didn’t have anything that could make him righteous accept the mercy of God.

In a few weeks, we will be gathered at Loring Park in Minneapolis with our fellow Disciples churches, First Christian-Minneapolis and Plymouth Creek Christian Church.  We go there not to show how hip or “woke” we are, but to witness to a God that loves all of us, that God became like us and died on a cross for us.  Because of this means everyone is welcome.  I am welcomed, you are welcomed because we place our trust in God and we share that good news with others.

Thanks be to God. Amen.

One thought on “Sermon: That’s Me In the Corner”