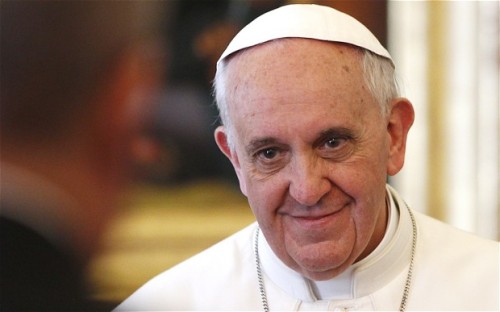 I like his tone, his willingness to live a simple lifestyle even though he’s basically a king.  I like that he is trying to be more pastoral with people, especially gays.

But while I like the pontiff, I understand that he operates within the sphere of modern Catholicism.  I know he’s not going to change teaching on gays or the role of evolution or how to treat those who have been divorced.  His style is to reach out and love people who he might think are sinning, not condemning them.

So, while this Pope is different in tone than his predecessors Benedict and John Paul I don’t think for a moment that he is shaking up the Vactican -at least not in the way that some would like.

I just wish the media would realize this.

Every time Francis says something about science or sexuality, the media treats it as if no other pope has ever said these things, when in reality what he is saying is not so revolutionary.  What this shows is that the media is obviously not paying attention to the intricacies of Catholic theology.  No, instead of doing something like, I don’t know, reporting, the media tries to make the Holy Father fit into their culture war story.

The lastest media spasm has to do with some remarks the Pope made concerning evolution.  From the media’s standpoint, the Catholic church were flaming creationists until Francis stepped in.

Political blogger Doug Mataconis shows that in the area of evolution, the Catholics have a long history of accepting evolution:

Specifically, the idea that there is anything “provocative” or “seemingly progressive” in what the Pope is saying requires one to either be completely ignorant about what the Church has taught about science in general or cosmology and the origins of the universe in particular. For one thing, the Catholic Church has not considered Genesis to be literal truth for a long, long, long time. Indeed, I am not at all certain that the idea that Genesis is a literal recitation of how the Earth and life on Earth came to be has ever actually been part of Catholic teaching, but I’m not nearly well-versed enough in the early Church to stake money on that idea. In general, though, the Church has viewed the Creation Myth set forth in Genesis, and much of what follows in that part of the Bible, to be largely allegorical in the same way that the parables that appear throughout the New Testament are allegorical.

As to the idea of the Big Bang, and even the idea of human evolution, the Church has largely accepted these ideas as scientifically valid while emphasizing that, in the eyes of Church teaching, they are the instrumentals through which God has acted. For example, in 1996 St. Pope John Paul II stated that ”Fresh knowledge leads to recognition of the theory of evolution as more than just a hypothesis.”  More recently, in 2006, the main Vatican newspaper published a column stating that the theory of so-called “intelligent design” was not science and should not be taught as such in schools. This was already the case in Catholic schools in the United States where, in science classes, evolution is taught as it should be and “intelligent design” is not. The next year, Pope Benedict XVI himself said evolution and faith can co-exist side by side and without contradiction, something that has long been Catholic teaching notwithstanding the fact that, at least initially, the Church did express some concern about Darwin’s theory when it was first advanced in the 19th Century. In other words, nothing Francis said here is revolutionary or “progressive” in any respect, something that even Hemant Mehta, who blogs at “The Friendly Atheist” acknowledges.

So, Francis didn’t say anything that Benedict, John Paul and many other Popes have affirmed.

The same thing happened with statements on gays at the recently concluded Synod of the Family.  And his statements on the economy.  He doesn’t say anything that contradicts his predecessors.

If secular reporters are going to cover this Pope, it might make sense for them to do some homework on Catholic theology.  But most reporters aren’t familiar with religion and so they try to fit this into the framework they do know: the culture wars.

But that isn’t the best framework to view this Pope or any other for that matter.  Yes, there are some similarities, but there are also differences.

I don’t think that only Christians should cover this Pope, but if you are going to cover religion, please do your homework.  Look for the nuances.  Look at what past Pope said.  Try to get an understanding of the issues.  And please don’t hype the stuff that isn’t that revolutionary. That’s not news. Go find what is.