This is a sermon I preached on Easter evening in 2005.  It is the text I will be preaching on this Sunday for the Third Sunday in Easter.

I love good food, and it probably shows. 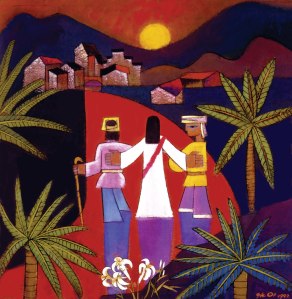 I consider myself lucky to be born in the family that I’m in, because I grew up with two wonderful cooking traditions. On my father’s side is the African American tradition of the Deep South. It’s a tradition of fried chicken, collard greens, mac and cheese, cornbread stuffing and sweet potato pie. It is all fattening and it’s all good.

On my mother’s side is the Puerto Rican cuisine. I remember coming over to my grandmother’s when she was still alive and eating rice with chicken, or arroz con pollo. Sometimes she would substitute sausage or fish for chicken, but it was just as delicious. When I was little, I used to call it “Orange Rice” and literally thought my grandmother bought orange colored rice. Then I also remember pasteles, a delicacy that is made from plantain. They are little meat pies filled with pork and raisins and olives. My grandmother and other relatives made them and have been known to carry them in my luggage when I leave Michigan bound back to Minnesota.

Food doesn’t just bring needed nourishment to us, but it’s a context that brings people together. I remember eating arroz con pollo and talking in Spanish to my abuela, or grandmother. I remember eating so much soul food that I probably needed angioplasty at a family event in Louisiana a few years back, but it was also a wonderful time to get requainted with my southern relatives.

Today, we encounter one of my favorite stories concerning the ressurection. It’s the road to Emmaus where Jesus appears in disguise to two of his disciples. These disciples were still in shock over all that had happened in the last few days; the shocking arrest, the mockery of a trial, the crucifixion. They had thought Jesus was the one that would save them, and now their savior was dead. They told this disguised Jesus that it was already the third day since his death and in Jewish tradition, this meant that the soul had left the body, meaning there was no hope that Jesus would ever come back. To add insult to injury, the women who were aquainted with Jesus reported that the body was gone. These two had lost hope and were alone. They had placed their hopes on this one called Jesus and it had all ended so badly.

Jesus decides to put a stop to this pity party and open the Scriptures to them. They were interested in what this supposed stranger was saying to them.

When they arrived in Emmaus, it was evening and not a time for someone to be on the road alone, so they asked the stranger to stay with them for the evening. He agreed and shared bread with them. It was when he broke the bread that the disciple’s eyes were opening. Jesus had been revealed and just as mysteriously as he appeared, he vanished from their sight.

It’s interesting that the resurrected Jesus made himself know presumably at a table, breaking bread. In preparing for this sermon, I noticed that some interesting things happened when Jesus was at the table. In the fifth chapter of Luke, there is the story of the calling of Levi, aka Matthew. Matthew was a tax collector, an agent of Rome. Now Jews didn’t take kindly to collaborators, and it was also known that tax collectors not only collected money for Rome, but took a little extra for themselves. So, it goes without saying that Matthew wasn’t popular. And yet, Jesus calls him and as a result, Matthew hosts a big party where all his fellow tax collectors were invited. Well, this didn’t go over with the Pharisees who thought it shameful that Jesus would associate with such lowlife. Remember what Jesus said? He said that he did not come to call the righteous, but sinners to repentance. Then there was the time he was invited over to the house of Simon the Pharisee. The story, record in the seventh chapter of Luke, tells of a sinful woman who comes in and washed his feet with her tears and poured purfume on them. Well the Pharisees were shocked. Didn’t Jesus know this was a “bad” woman. Why would he even allow her to touch him? What does Jesus do? He takes Simon and the others, all who were considered high society, to task for not being hospitable to him. Only this woman who was considered and outcast, showed him proper respect and for that, he forgave her sins.

Then there is the story of Zacheus, another tax collector. In Luke 19, we read that Jesus invites himself to Zacheus’ house. Zaccheus is so moved that this one called the Messiah would stay with him, that he repents and repays those whom he has cheated.

Over and over again in the book of Luke and in the other Gospels, Jesus is found somewhere where they is a table and food. What’s interesting here is that these “table talks” give us an insight into who the Son of God is and also what God is all about.

The prior stories all point to the fact that God is one who loves everyone and there are no second class citizens in God’s kingdom. Jesus broke bread with tax collectors and other various “sinners.” He also dined with the rich and powerful as well. This shows that Jesus was not a repsector of persons, but welcomed all. These “table talks” remind us that as children of God and followers of God’s Son, we are called to welcome all, regardless of their status in life.

So what does the meal in today’s text mean? Well, let’s go back to the fact that these disciples had lost all hope. They didn’t realize Jesus was alive. As Jesus told them Scriptures they were rekindled with some hope. It was in the breaking of the bread that they realized who Jesus was. In the context of this simple evening meal, they were reminded that death could not silence Jesus. He was alive, he had conquered death, and as a result, we now have new life. Not only is Jesus one who welcomes all to the table of fellowship, but he is one that death can’t hold. No earthly power can hold God back, thanks be to God.

In a few moments, we will partake of the bread and the wine. In Disciple theology, what other call an altar, we call a table. I tend to like that. An altar has a regal image to it, relating more to a king. That’s not a bad reference, since Jesus is a King, but the word table connotes something more basic and common. It represents the Son of God who came to earth as a peasant child, and then as an adult spent time teaching at tables. We still learn from Jesus today at this table. It is here we are reminded of God’s love for us-all of us, regardless if we are black, white, rich, poor, straight, gay. We are reminded that God loved us so much, God became one of us, lived among us and died the death of a common criminal. We are also reminded of his ressurection and know that not even death could hold him and no longer has a hold over us as well.

In closing, go back to talk about food. A few years ago, there was a movie called Soul Food, about an African-American extended family in Chicago. The matriarch, Big Mama, would cook these wonderful meals on Sundays after church and all the family would come over. Now, at some point, Big Mama fell ill and was hospitalized. When she ultimately died, the meals stopped and the family fell apart with certain people not talking to each other.

The narrator of this story, Big Mama’s eldest grandson, schemes to get the family together and concocts a story about some hidden money. Everyone attends and one by one, they all come together and start making the meals that Big Mama used to make. In the end, the family was back together all through a meal. The meal, healed a broken family.

This is the savior we worship, one that is made known to us in meals. The question I want to end with is this: as followers of Jesus, do our meals, at this table and at all of our tables reveal the something about the Risen Savior or do they reflect the table of the Pharisees, which is built on exclusion?

Something to think about. Amen.