“Be in the world, but not of the world.” 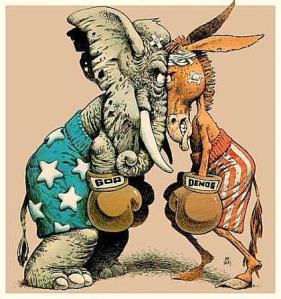 That was a phrase I heard a lot when I was growing up.  In my evangelical upbringing, there was a stress about living where we are, but not follow the ways of the world.  According to the phrase, we are to follow Jesus and not gods of this world.

Around the time of seminary in the late 1990s, I started hearing talk about”empire.”  The empire was something that challenged the authority of God.  In mainline/progressive churches, talking about empire was their version “not of this world.”  The thinking is based on the depiction of the Roman Empire during Jesus’ time.  It was an all encompassing entity that demanded loyalty and worship.  The empire tends to be used also to describe a modern Rome; namely the United States. In this view, Christians are to resist the power of empire which are rather great.

There is a lot of talk about how we should not fall for the lies of the world/empire and follow Jesus.  But most our talk is just that, talk.  While we denounce the world/empire, we have basically got in bed with the Ceasars of this world.  It’s been well recorded about how evangelicals had a Vegas-style wedding with the GOP.  What is less well-known- especially to those on the inside is how progressive Christians have swallowed whole left-wing politics.  It’s dressed up in churchy language of course, but it’s still a melding of Ceasar and the church.  Many progressive Christians are engaged in politics that is basically left-liberal politics and what I think is very disturbing is that they seem to be unaware that they are just as captive as their conservative sisters and brothers.

None of this is to say that conservatives are any better- they aren’t.  But progressives are not innocent.  Both sides have bought into the conservative/liberal mentality that has become a hallmark of our polarized American society.  Methodist pastor Allan Bevere shares how the church has become captive to the political system:

I immediately think of the (United Methodist) General Board of Church and Society that belongs to the first group, while United Methodist Action (affiliated with the Institute on Religion and Democracy) is an expression of the second group. The former group sounds less Christian and more like the Democratic Party, while the latter group sounds less Christian and more like the Republican Party. Indeed, when I read the anything from either group, I often struggle to see the decisively Christian theological presence in their arguments.

The problem is that both groups that Bishop Carter identifies suffer from their own version of civil religion. James Hunter defines civil religion as “a diffuse amalgamation of religious values that is synthesized with the civic creeds of the nation; in which the life and mission of the church is conflated with the life and mission of the country. American values are, in substance, biblical prophetic values; American identity is, thus, vaguely Christian identity” (Hunter, To Change the World, p. 145). As Hunter rightly notes, the religious right wants to keep America Christian (as they understand it) and the religious left wants to make America Christian (as they understand it). And since both sides are more decisively Democratic or Republican than decisively Christian, the former is unable to apply their concerns for life and hospitality to the unborn, while the latter cannot apply them to immigrants and gays and lesbians. But a consistent ethic of life and hospitality “represents a continuum from conception to death, from the individual to the creation, from interventions in and support of the lives of unborn children and their pregnant mothers, trafficked and enslaved young people, endangered coal miners, incarcerated young men on death row, tortured prisoners of war, the dignity of the aged, and the fragile ecosystems upon which we all depend” (Carter).

As long our UM boards and agencies and organizations (official and otherwise) and we individual United Methodists are nothing more than extensions of the Democratic and Republican Parties, we will not only continue to be selective as to who receives the hospitality of Christ through us, we will also fail to be the alternative to the world that the church is designed to be. One can’t be an alternative when one simply parrots the prevailing political polarities. Until we embrace a consistent ethic of life, our ethic of hospitality will be inconsistent. We will continue to be inconsistent as long as we sound more like the politicians in Washington D.C. than the carpenter from Nazareth.

The problem in mainline/progressive circles is that we can’t really tell the difference between liberal politics and prophetic witness. We tend to think that if someone speaks out against a conservative policy, they are somehow in the same league of Old Testament prophets like Amos. Frankly, if we are nodding in agreement with what the “prophet” says all the time, that person is probably not a prophet.

But as I said before, this captivity is very subtle. I don’t think people are deliberately trying to neutralize the church, but that is what is happening here. We might tell ourselves that the work for a higher minimum wage is part of God’s plans of salvation, but is out work for God or the Democratic party?

I don’t think the answer here is for Christians to withdraw from politics. We have to be able to engage the world around us. But the answer that has elluded me all these years is how can church leaders raise Christians who understand the political landscape and seek to help Christians make choices based on their faith. It’s too easy for churches to just capitualte to the wider culture. What I think is needed is some room for the pastor to help people discern what it means to believe and act in this culture. It’s going to mean thinking long and hard about issues seeking a way that will help the least of these. It might also mean having to deal with someone that has a different ideology. It means working together to work for healing and wholeness with someone you might not agree with. It would mean really asking God to lead us instead of using God a political cheerleader.

I don’t have all the answers, let alone the vision of this change in the church’s public witness.