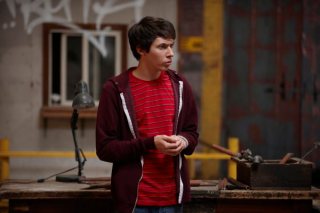 I’ve been fascinated by SyFy’s new series Alphas, which wraps up its first season tomorrow. For the uninitiated, think a lower-cost version of X-Men.
There’s a lot about the show that I find cool and interesting, and one of those is the inclusion of an autistic character; Gary Bell, played by British actor Ryan Cartwright. Gary’s ability is to see and understand electromagnetic frequencies, which he can move with ease through his hand movements.

Cartwright’s portrayal might not be the most perfect, but I do think it is one of the better ones in entertainment. In a recent story in the Washington Times, we find out that there was some thought put into how to correctly portray an autistic adult:

Naturally, the autism community carefully watches portrayals of autistic characters on television, something the show’s creators seem to be aware of. “Everyone involved in the show is taking great pains to be sensitive to the autistic community,” says Cartwright.

Interest in creating a realistic portrayal of autism started before filming began with Dr. Susan Bookheimer, a faculty member at the UCLA Neuroscience Program, who has served as a consultant for “Alphas,” offering advice on aspects of Gary’s presentation and symptoms. Bookheimer also consulted on each script as it was developed.

“I read the dialogues and gave input on how this character might have reacted, the kinds of things he would and wouldn’t say, and generally tried to give insight into the inner life of a high functioning person with autism,” she says. “I wanted to help make the character as genuine as possible, not a caricature, but a real person with many of the issues that an individual with autism has.”

For his part, Cartwright researched autism in order to be able to play Gary as a real person. He says that in addition to consultation with people who work with autistic individuals, he watched documentaries and read books by autistic authors Temple Grandin and Daniel Tammet, along with vlog and blog sites created by autistic people.

“Reading about autism and neuroscience helped me understand the reasoning behind a lot of the physical attributes and difficulties of people with autism, which in turn helped me create, as opposed to imitate, a physicality for Gary,” he says.

One autistic blogger was sold on Gary after one early episode:

With episode 104, or the fourth ALPHA show, I am even more fascinated. In this episode, Gary, who is most accurately portrayed by Ryan Cartwright, meets another autistic woman and his demeanor and attitude take a dramatic turn.

Even with his lack of eye contact (which I absolutely adore seeing on the screen) does not hide his..affection for finding someone else, in female form, who speaks his language and with whom he can easily communicate.

I soo identify with this episode and the profound and not so subtle changes that take place in Garys life upon meeting someone of his…kind. (I do not want to be rude or offend anyone with some of my word choices here, so bear with me) Quite suddenly, he is Not the odd man out or flying solo. He meets a woman and it really changes him.

I was also interested in that episode, not only because they got Gary’s mannerisms and need for routine so dead-on, but because we find out that woman who is severely autistic has special capabilities of her own and reminds us that even those who are profoundly affected by autism can still communicate and have value.

If you haven’t seen the series, which has been renewed for a second season, download them and judge the Gary character yourself. I think it’s a good step in the right direction.