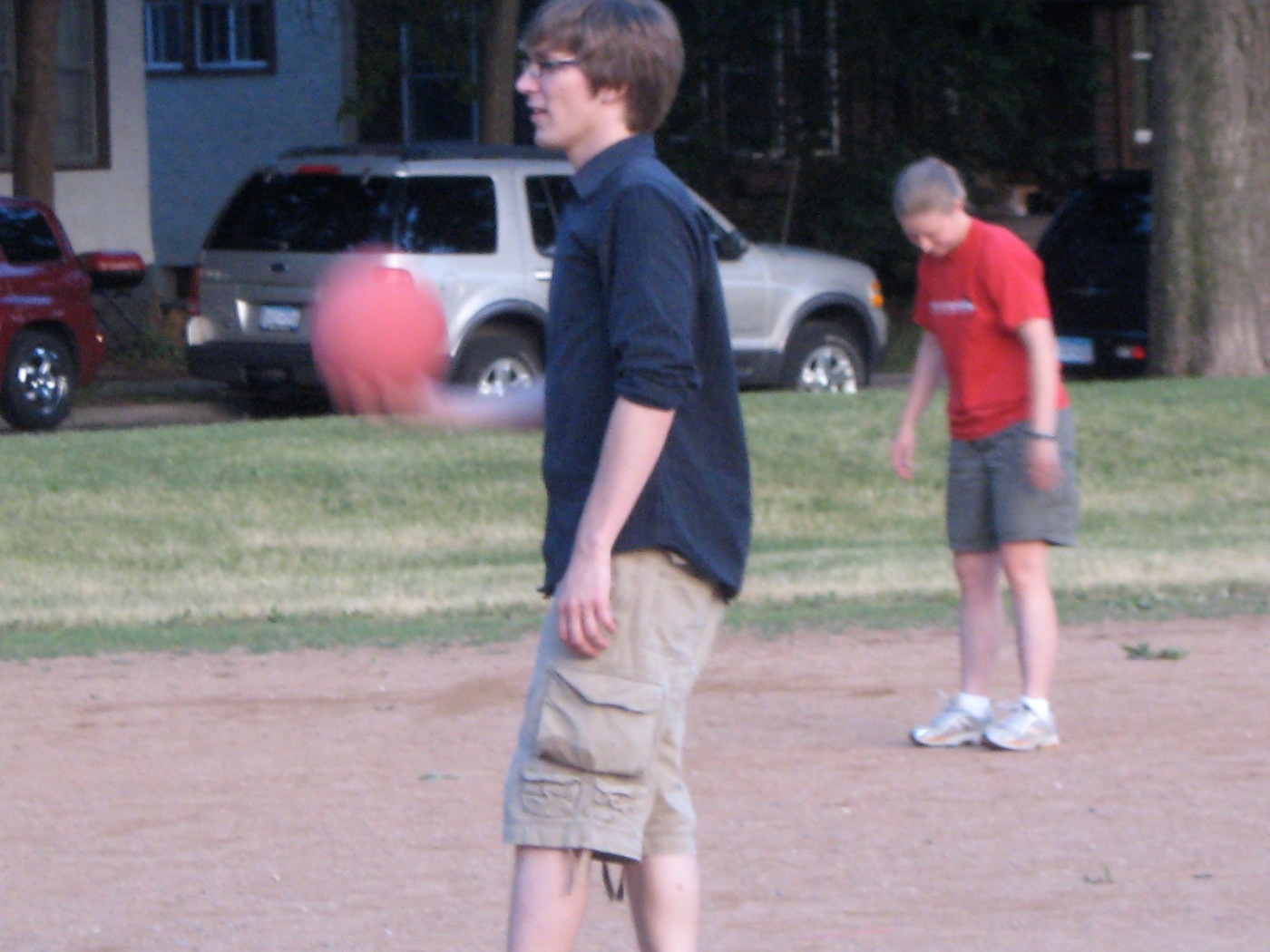 This is the sermon I wrote for this Sunday back in 2008.

Last Thursday night, I decided to do something that I haven’t done in a long, long time.

Long before I could drive.

Long before I graduated from high school.

Yes, I played that simple game where we tried to kick a plain, red ball and run around bases. It was fun, but I was reminded of something. I know that many of you are “more mature” than I am, but I can say that playing kickball at 38 is a lot different than playing it at 13. When I was 13, I could play kickball forever. These days, not so much. And my muscles feel it the next morning.

I was doing this all for a reason. I am part of a group young church folk, ordained and not ordained in the United Church of Christ and the Disciples that were looking for ways to get young adults in their 20s and 30s who were not really connected with a congregation involved in the life of the church. We’ve called the group Come Thirsty and to start things, we are meeting every

Thursday in July at a local park in Minneapolis for a game of kickball and then going to the nearby Bryant Lake Bowl for fellowship and maybe a game of bowling.

There is very little that makes it seem like a church event, with the exception that we start things off with prayer. Other than that, it looks like a normal gathering of 20 and 30-somethings.

To some, it might not seem like much is going on to further God’s work in the world. What does kickball have to do with Jesus? Well, maybe everything.

In today’s gospel, Jesus decides to tell a story about the kingdom of God. Now, I love the parables and have since I was a child. But I have not really like the parable of the sower, the first parable. It reminds me of my time in college when the campus pastor would use this sermon to talk about our spiritual lives. The message is that we need to be really good and have open hearts to recieve God’s message. This story had been turned into a moralistic tale and it seemed to lose its mystery and power.

But these days, I have a different understanding of the parable. I’ve said this before, but parables are not really morality tales, but peeks into what the kingdom of God is like. That is what is going on here.

Jesus tells a tale of a sower who throws the seeds here, there and everywhere. Now, I don’t have a green thumb, but I know well enough that any farmer or backyard gardener, is very careful where the seeds go. They take care to plant then in the right place and in the right soil. Seeds are precious and have to used with great care.

But this sower is not that careful. In fact, he is not careful. This person just throws seeds anywhere, even though there is good reason that such a process isn’t going to be that fruitful. And it looks like such a prophecy is becoming true, because the seeds get eaten up birds, choked by thorns or simply die on the rocks. As if by luck, some of those

seeds fall on good soil and they produce a bumper crop beyond anyone’s imaginations.

So, what is going on here? Well, let’s imagine that the sower is God or Christ. God decides to just spread God’s seed, or God’s word anywhere, not caring if it produces fruit or not. This is a wonderful example of grace. God’s love is extravagant, it is wasteful. God is hardly stingy when it comes to sharing love with creation. In some cases that love will be shared and not returned. In others, it will produce and abundant harvest that will seed another generation. God is willing to take the risk and flings seeds far and wide.

What you don’t see here is the message that we normally hear: that if we work hard and are dilligent, things will work out. I am not saying that we should ignore that message. What I am saying is that in God’s economy this rule doesn’t apply as much.

When Jesus was on the earth, he was always sharing his life with others. Some took that message and ran with it, becoming faithful disciples. Others refused to hear the message. Now matter what, Jesus still shared, like a sower sowing seeds every which way.

As Christ followers, we are called to do the same. Churches are called to share God’s love in word and deed. Now sometimes, that will be warmly recieved, and other times it will not. But like God, we just keep on doing what we are doing.

As this congregation readies itself for a new pastor, we are reminded in this parable that we are to go out and start planting seeds. We don’t have to wait for a pastor to do that. We are called to do that NOW. We are called to share God’s love in word and deed to the world outside the doors of this church. When we gather to pack food packets for the hungry, when we gather weekly for prayer, when we show concern with our sisters and brothers in our workplaces, we are planting seeds. The sower went out to plant seeds. So did Jesus. And so are we. The church is not a club, there to serve only the needs of each other, but a staging ground where we prepare to go out into the world.

We will encounter problems. Some of those seeds will fall on hard soil or deaf ears, some will fall on those who worry about everything, some will be taken by the birds or get concerned other things. But we still plant away because in the end, the harvest is going to be plentiful. Lives will be changed.

So back to that game of kickball. To some it might seem like a waste of time. But I have to believe we are planting seeds in the lives of young adults who might not have thought about church before. Our work is having an effect in that local congregations are starting their own groups, some after a long dormancy. I believe seeds are being sown, here and there, and some of it will not take root. But some of it will. But it really doesn’t matter; because we place our trust in God who will produce a bountiful harvest, far beyond our imaginations.