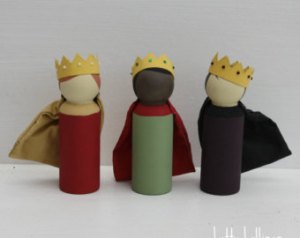 One of my earliest memories of Epiphany was seeing a manger on display at Emmanuel Lutheran School in Flint, Michigan. It was the winter of 1978 and I can remember standing in line and looking at the nativity scene. I was transfixed on the Wise Men. The three figurines were fascinating, but there was one that held my attention. The other two kings were painted the skin color of Europeans. But this final king was different from the other kings and even everyone else in the scene. He was painted with a dark color, kind of like me.

I was fascinated by seeing someone worship the newborn king that looked like me. I like to think that this experience told me that Christmas and Epiphany was for me, but I’m not sure I was thinking that deeply; I was only 9 years-old after all.

The other reason that Epiphany holds a special place in my heart is hearing the stories of my mother. In Puerto Rico as it is most of Latin America, Epiphany was a big deal. Mom would tell me that kids would get get gifts on this day. She also told me that kids would somtimes put hay under the bed for the Magi’s camels. If the hay was gone the next morning, well, that was proof that the wise men had stopped by while the children were asleep. Epiphany still plays a role in modern day Puerto Rico. The image of the Three Kings are found everywhere; it is imbedded in the heritage of the island.

So we start our Matthew text with the Magi coming into town and visiting Herod, the vassal king of Judea. Now contrary to lore, there weren’t three kings. Actually we don’t know how many there were. What we do know if that they came Herod asking for help in finding the king. The magi were probably court officials that provided predictions based on the stars for their royal patrons. It wasn’t unusual for Magi to go on journeys to offer gifts to kings. A historical record notes that Magi came and gave gifts to the Roman Emperor Nero.

When they arrive asking for help from Herod, you can see why Herod was worried. Only a few miles away there was some child who was considered a threat to his rule.

Because of culture, we tend to see the Magi as the central characters in this story. They are important, but they aren’t the central character. The person that matters here is Jesus. What the Magi did do is point us to the Savior, to the Christ child. The true king of all creation has been revealed and he comes in the most humble form; a human baby.

John 1:18 says that no one has ever seen God except through God’s Son. The writer of John 1 reminds us that Jesus wasn’t just a good man, but he was the Son of God, the one that enfleshed God in human skin.

For the last few days and weeks, I’ve been thinking about the nature of the church. What is the church for? What does it mean? What does this congregation mean?

I stumbled on an interview of Scot McKnight, a well-known evangelical theologian. He’s working on a book about the nature of the kingdom of God. For McKnight, the kingdom of God occupies a certain place and time. The church is supposed to be a small representation of God’s future kingdom breaking into the here and now.

Epiphany is not about the Magi, but the Magi are important because they point to the Christ. What if that’s what the church is also called to do- to point to Christ? What if in our teaching, making bulletins, playing music, feeding the hungry, helping the hungry, what if our church, this church is pointing to the God revealed in Christ? That means then that Epiphany is aslo about us; about us pointing creation to God, especailly the God revealed in the life, death and resurrection of Jesus Christ.

For the next month and a half, we will be reading stories about how Christ is revealed to all of creation. I’d like for you to keep somethings in mind: How do you see Christ revealed in your life? How are you revealing Christ to others? How can this church, how can First Christian Church of Mahtomedi, MN reveal Christ to the world?

I’ve been seeing a poem making the rounds that I’ve heard before. It’s called the Work of Christmas and it’s by the African American theologian Howard Thurman. It says:

When the song of the angels is stilled,
When the star in the sky is gone,
When the kings and princes are home,
When the shepherds are back with their flock,
The work of Christmas begins:
To find the lost,
To heal the broken,
To feed the hungry,
To release the prisoner,
To rebuild the nations,
To bring peace among brothers,
To make music in the heart.

May we all have eyes to see Christ revealed and may we, as individuals and as church reveal Christ to others. Thanks be to God. Amen.